What can you do in a day in a city?

The line for Ethiopian Airlines going to Addis Ababa did not look promising. Chaos ensued when the flight was called for boarding. One of the passengers was asking people in line if they could carry a bag for her. It was chocolate for her kids and she was over the limit so she couldn’t bring them into the plane. I had a seventeen-hour layover in Addis Ababa before my flight to Cairo. I intentionally chose this long layover because I learned that if you had a layover in Adis with Ethiopian Airlines that’s longer than eight hours, they’ll give you a hotel room in the city. A visa is required for Filipinos to enter Ethiopia but I read somewhere that if it’s just a layover that’s less than 24 hours, there would be no need for a visa. I prayed for it to be true. Upon checking in for the flight, the ground crew gave me and my friend Hazel our hotel vouchers. I was ecstatic! One of my goals in life is to see a bit of every continent in the world. My destination was Egypt, which is Africa. But for some reason, it’s not Africa enough for me, so 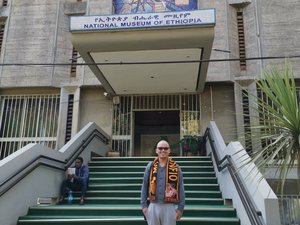 I wanted to go to Ethiopia, even just for a layover. The flight attendants of Ethiopian Airlines were some of the most beautiful women I’ve ever seen in my life. They looked like models walking down the runway.

There was a Filipino woman fully clad in black Abaya and Burka who was traveling back to the Philippines from Saudi in the airport at Adis. She didn’t speak much English and couldn’t understand why the plane offboarded in Adis. So I explained to her that she had a connecting flight in Adis for twelve hours and that she could leave the airport and use the hotel voucher given to her. She looked so worried but followed my advice. We fell in line at the counter that gives passes for long layovers to be exempt from the visa requirement. After getting our passes we went to the exit. I was told that I had the wrong pass. My friend hazel already got past immigration and was waving at me. I had to get back to the booth to get the right card. I was pissed off but had to reign it in for the fear of not being granted the privilege 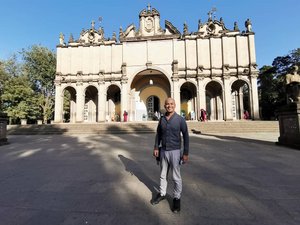 of entering Ethiopia without a visa. I was given the right card and set foot in Africa for the first time! I was so excited. The Filipino woman in Abaya looked so lost. I helped her get to the shuttle that would take her to her hotel, which was different from ours. I told her she must ensure she’s back at the airport before her flight. I was doubtful she’d be able to manage that as she couldn’t communicate well so I wished her luck. Staying in the airport wouldn’t have been a better option as the airport was very chaotic with no clear indication of where one must go.

We were brought to one of the better hotels, the Ramada. Not only did we get a hotel room, but the voucher also included a buffet at the hotel! It was a large room and one of the most luxurious ones I’ve been in. I’m a backpacker with a very limited budget so I never stay in hotels on my own when traveling. I went to the bathroom to refresh before going to the buffet. I dried my face with the towel and wondered why it was rough. I 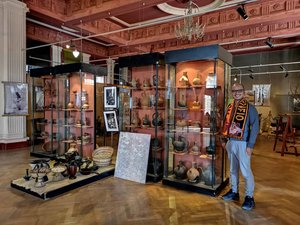 looked up Ramada Addis Ababa while waiting for my flight in Dubai so I knew it was a four-star hotel so I expected more. Turns out the towel was actually a rug, and I used it to dry my face! That’s how clueless I was about fancy hotels. Take me to a five-dollar hostel and I’d know my way around. The buffet was great! I’m vegan so I couldn’t eat everything but there were plenty of options for me. I didn’t know anything about Ethiopian food but it didn’t look like I had any because I stuck to the ones that look vegan, which were mostly salads.

Since we were getting so much from Ethiopia for nothing, Hazel and I decided to give back a little by spending some money there. We asked the concierge about hiring a tour guide. He brought us outside and called a driver. It wasn’t a taxi but a beat-up car. He said to pay the driver $60 to $70. There wasn’t much to see in Addis. We went to a couple of museums and learned a little bit about their history. They had a much older history than I thought. One of the 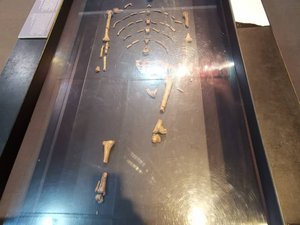 highlights was the fossilized skeleton of Lucy, the oldest human remains ever discovered. The skeleton was broken into hundreds of pieces so one could hardly tell what it was. We went to an Orthodox church. It was cool to see their rituals and chanting. It looked very much like Catholic rituals to me, only more archaic.

I don’t think I would’ve survived backpacking in Ethiopia on my own without a tour guide. The public transportation was minibusses, which looked like tiny old VW vans. They were packed with people and live chickens. We drove past the famous market. When the driver asked us if we wanted to explore it on foot, we decided against it. We didn’t feel safe being the only foreigners there. I know! It sounds bigoted but we just had the feeling. If something wrong happened we were so far away from the Philippines so we had to be extra cautious. Ethiopia has no shortage of beautiful faces. I noticed many of them were lighter-skinned than other Africans. There must have been a lot of mixing with north Africa and the middle east as their history is tied to that region. Our tour guide also drove us to a hill for a view of the city. We were supposed to hike to the viewpoint but didn’t have the energy so we decided to go back to the hotel. I asked the driver to take us to the mall so we can buy souvenirs at a place we felt comfortable in. He said there were no malls. He brought us to a supermarket but I couldn’t find anything there either. I entered another supermarket and there was nothing there either. They weren’t even selling a lot of stuff to begin with. I realized that “underdeveloped country” meant there were a lot of things that you couldn’t find. Or maybe I just didn’t know where to look. It was a stark contrast to all the luxuries I’ve seen in the few days I’ve spent in UAE before going to Ethiopia. Addis looks like a city on the rise but it still has a long way to go. We went back to the hotel to get some sleep before our flight and the chaos in Addis airport.

I’m writing this three years after my trip to the Middle East and North Africa. I only just realized that I didn’t save any of my Ethiopia photos in the cloud. All of them were in my old phone which I already disposed of. Good thing there were some on Facebook that I was able to download.

What can you do in a day in a city? on afric.info